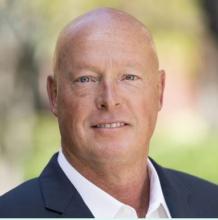 Bob Chapek is Chief Executive Officer of The Walt Disney Company, one of the world’s largest media and entertainment companies. Mr. Chapek working in the role of CEO of Walt Disney since February 25, 2020.

Before becoming the 7th CEO in Disney’s nearly 100-year history, Mr. Chapek served as Chairman of Disney Parks, Experiences and Products since the segment’s creation in 2018, and prior to that he was Chairman of Walt Disney Parks and Resorts since 2015.