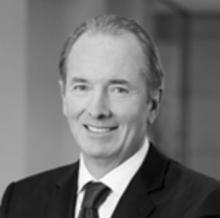 He joined the bank-holding company in 2006, just in time to witness and participate, as co-president, in the near train wreck that was the global financial crisis of 2008.