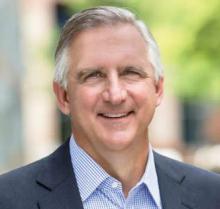 Robert A. Bradway is Amgen’s chairman and chief executive officer.

He became chairman in January 2013 and chief executive officer in May 2012.

Bradway served as the company’s president and chief operating officer from May 2010 to May 2012, and was appointed to the Amgen Board of Directors in October 2011.

He joined the company in 2006 as vice president, Operations Strategy, and served as executive vice president and chief financial officer from April 2007 to May 2010.

He holds a bachelor’s degree in biology from Amherst College and a master’s degree in business administration from Harvard University.