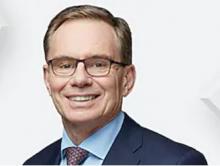 The non-executive Chairman of single-tier Board of Directors in Royal Dutch Shell is Sir Andrew Mackenzie.

Sir Andrew Mackenzie was appointed Chair of the Board of Shell plc with effect from May 18, 2021.

From 2005 to 2013 Sir Andrew served as a Non-executive Director of Centrica.

Sir Andrew spent 22 years with BP, joining in 1982 in research and development, followed by international operations and technology roles across most business streams and functions – principally in exploration and production and petrochemicals, including as Chief Reservoir Engineer and Chief Technology Officer. Latterly he was Group Vice President for Chemicals in the Americas, then Olefins and Polymers globally.

In June 2021, Sir Andrew was appointed the chair of UK Research and Innovation.