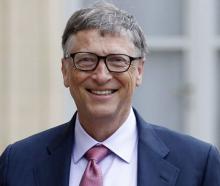 When the World does not know much about software, Bill Gates has dreams to develop software operating system. Slowly he converted that into Windows operating system which is most user friendly and which is used by most of people in World.