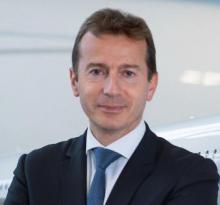 Guillaume Faury is CEO of AIRBUS from April 2019.

He was previously President of Airbus’ commercial aircraft business, a role he had held since February 2018.

Prior to this, Guillaume was Chief Executive Officer of Airbus Helicopters (2013-2018), where his achievements included restructuring its manufacturing system and introducing new technologies.

He graduated from the École polytechnique in Paris in 1990 and, subsequently, from the École nationale supérieure de l’aéronautique et de l’espace in Toulouse.